The ICA's show A Journey Through London Subculture opens Friday. Here's what's in my vitrine

This Friday, the ICA’s off-site show A Journey Through London Subculture: 1980s to Now opens to the public.

It’s a group show, with 60 individuals or collectives from across the decades given a vitrine to do with what they want.

And one of the vitrines was given to me.

I’ve written about the background to the show for this weekend’s Financial Times, which’ll be out Saturday.

But here’s what’s in my vitrine.

We installed them on Saturday at the Old Selfridges Hotel, an old abandoned hotel space which will be the exhibitions home for the next five or so weeks.

Each one was labelled so we knew whose was whose. 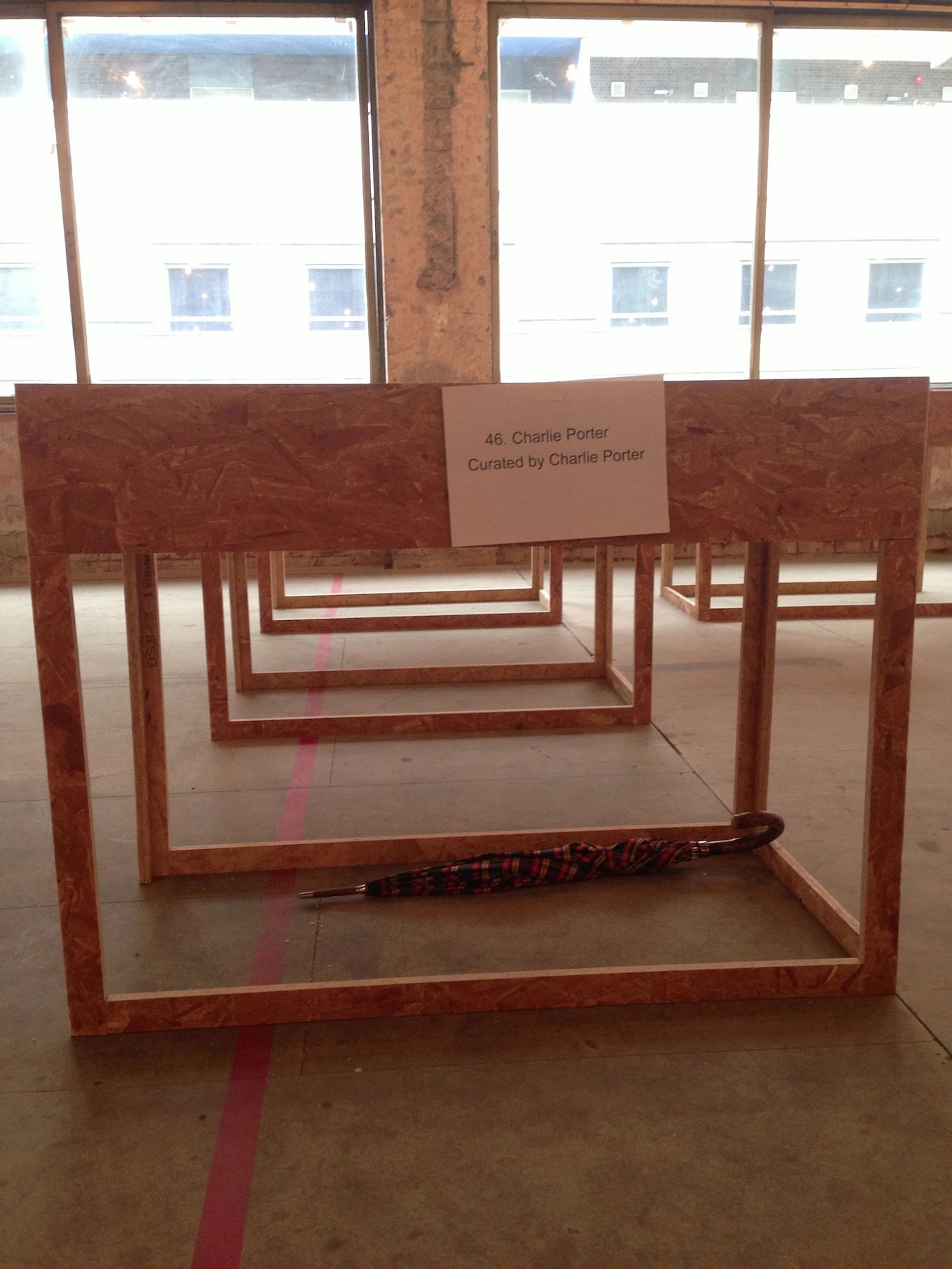 The umbrella’s not in the show. 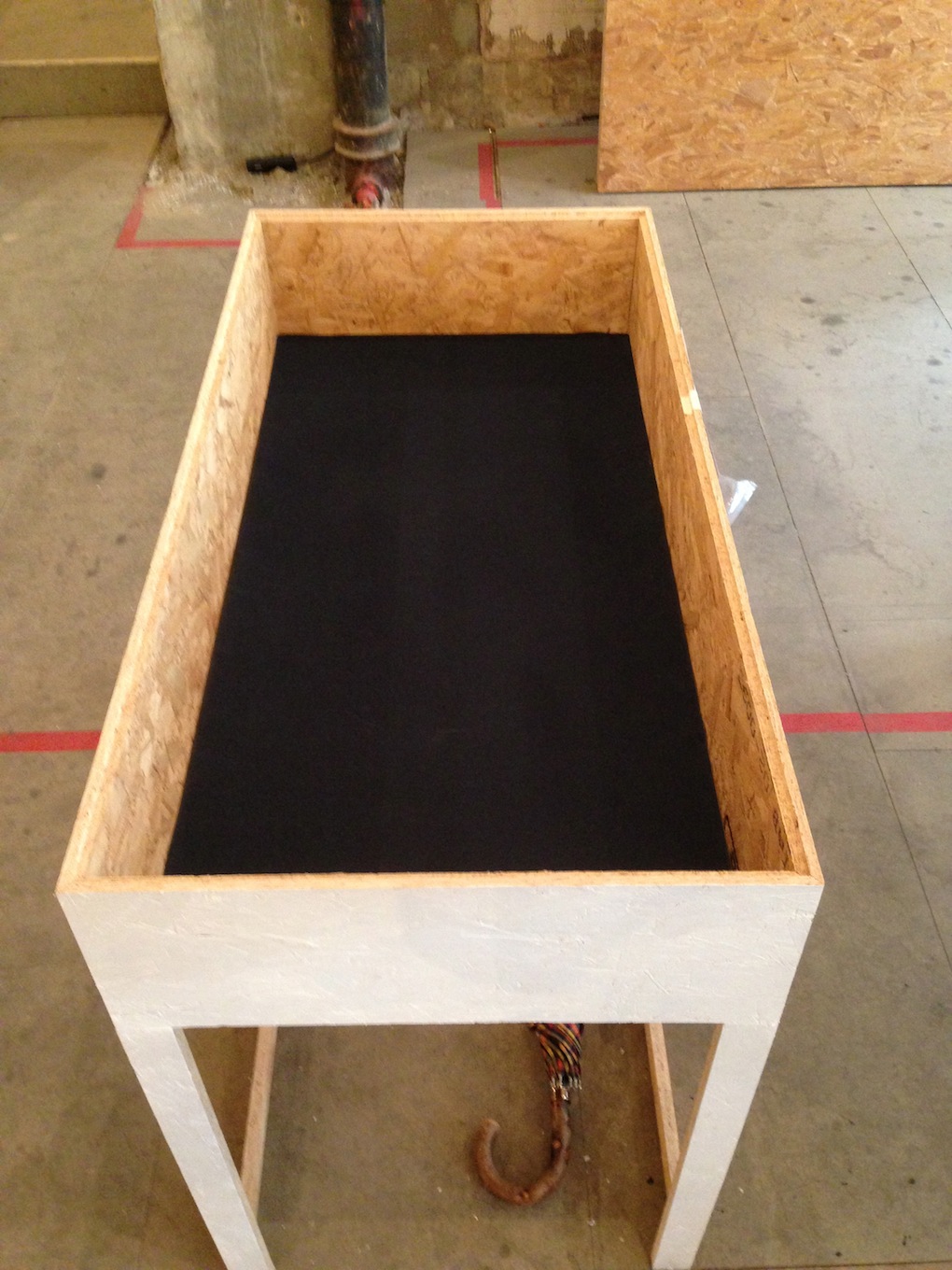 Most people’s vitrines are filled with their own work, or artefacts from their own life.

I’ve used the vitrine to study the subversive act of the fashion show invite.

How radical London designers, those who have come from subcultures, can use the fashion show invite as a way to infiltrate and confront the mainstream.

By sending a radical invitation in a plain envelope to, say, Vogue, designers immediately force those within more straight-laced culture to deal with imagery or ideas they might normally avoid.

Ideas that could be sexualised, disturbing, or politically provocative.

Like this invitation for John Galliano’s first presentation after his graduation show.

It was for a collection called Afghanistan Repudiates Western Ideals. 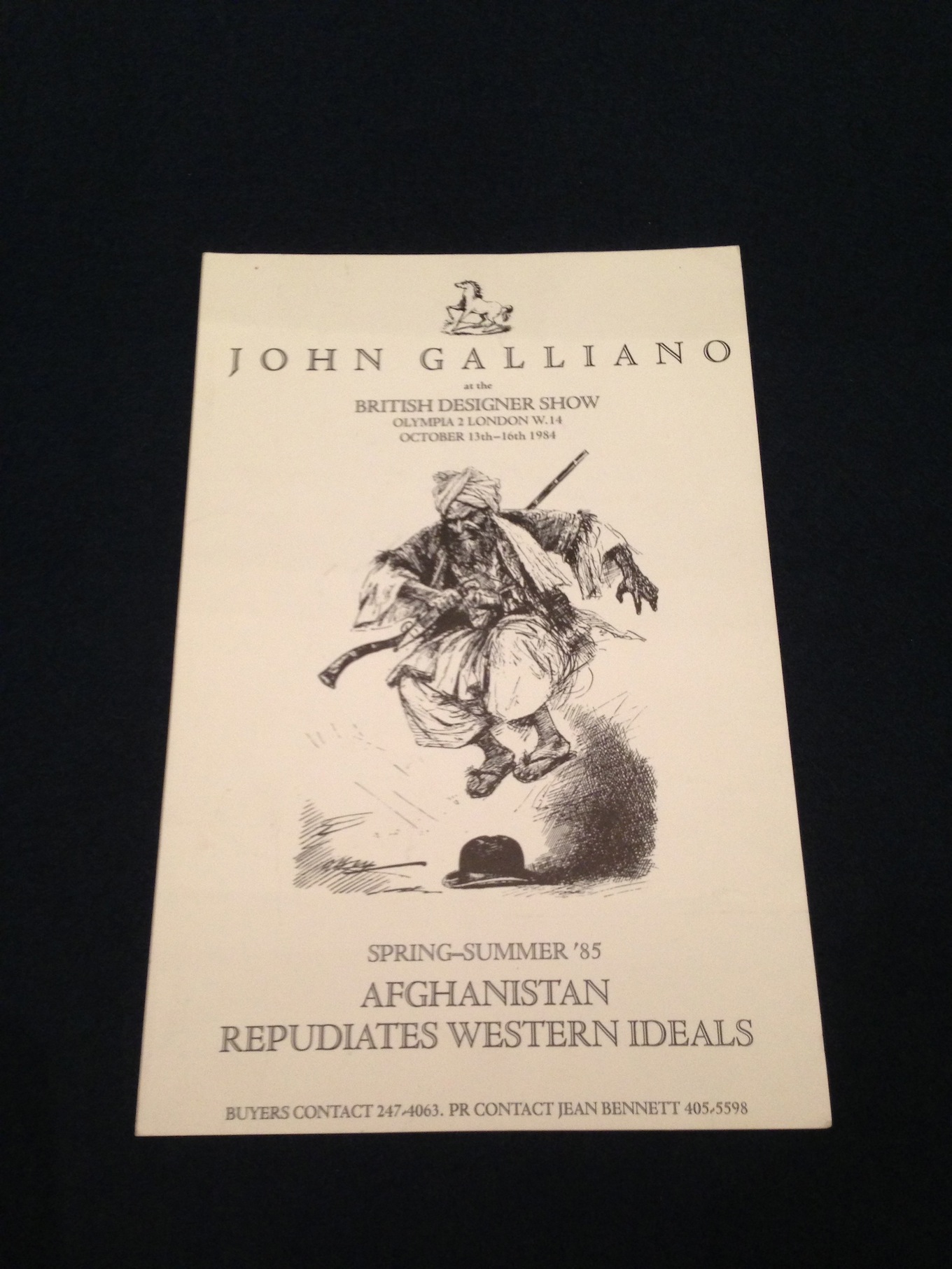 It’s one that shows Galliano has long had an interest in the way cultures clash, shift and interact.

And also proves that he has never had any truck with being sensitive.

It’s a contentious graphic that no fashion label would dare send out today.

Here’s how Colin McDowell describes the collection in his book, Galliano.

“The title, and inspiration, came from an arcane moment in history when King Amanullah Khan, who ruled Afghanistan from 1919 to 1929, issued a decree three years into his reign forbidding his subjects from wearing national costume and requiring them to dress in Western fashions… What stimulated Galliano was the idea of the people of Afghanistan trying to comply.”

The invite is from the collection of Iain R Webb, who saw the show at the time.

I emailed the people at Vivienne Westwood asking them if they had any invites in their archive that were subversive.

They got back to me straight away, saying they had just the thing.

The invitation to Pagan V. 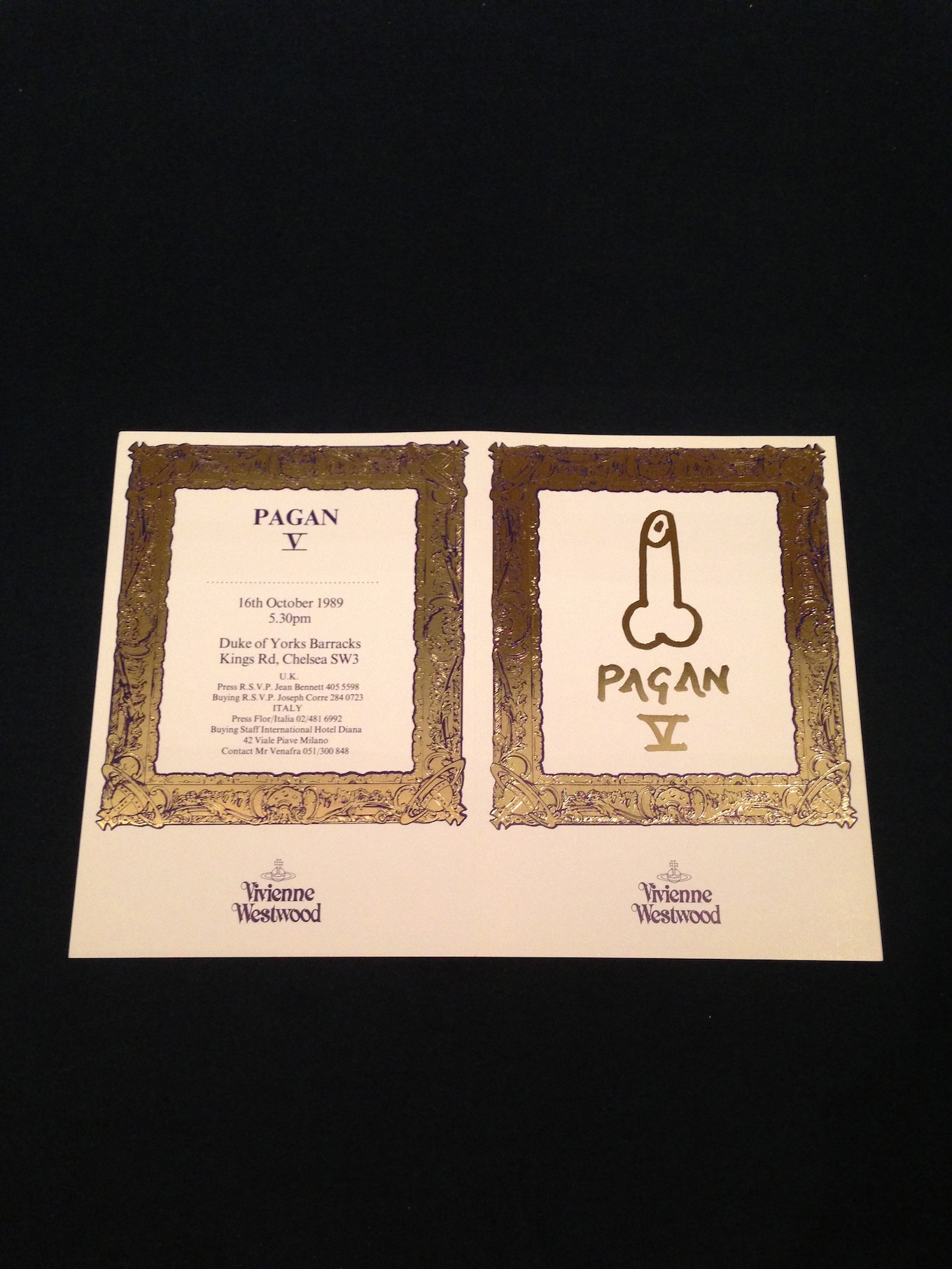 Looking through their archive, most of the invites around then all had this gilt frame with a different image for each show.

Pagan V was the one where female models came out in knickers with a knob drawn on them.

I wanted to include a show note in the vitrine too.

Continuing the confrontation when the establishment figure takes their seat at the show.

Here’s the show note for The Hunger by Alexander McQueen.

The first McQueen show I saw.

I was doing work experience on Vogue at the time, during my final year at college, and there was a spare ticket.

The image still shocks me. 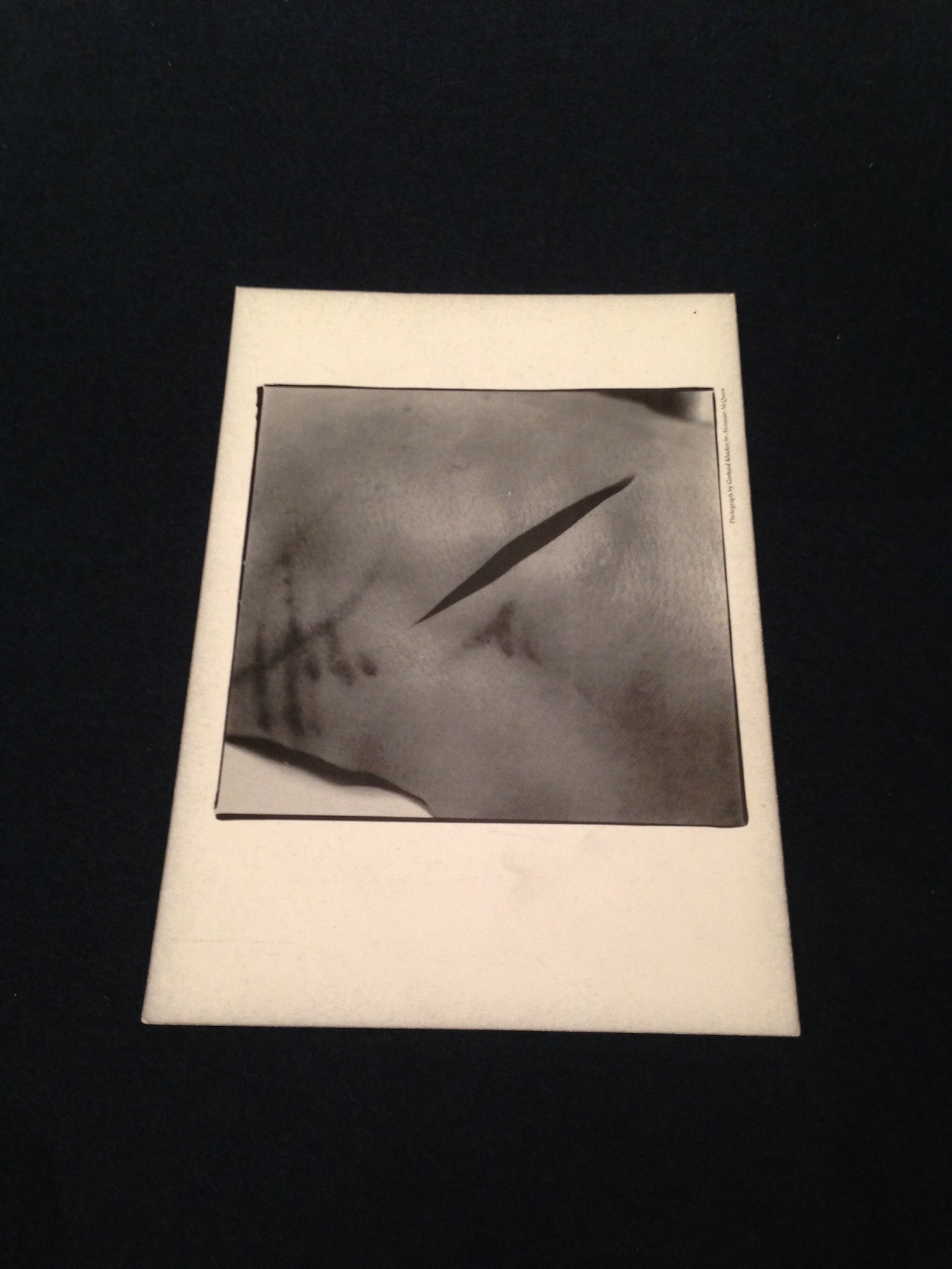 Some people who were around while I was installing said it refers to a religious image.

I don’t need religious connotations for it to be powerful.

The Hunger was actually McQueen’s most orthodox show, in terms of the presentation at least.

As far as I know, it was the only one shown in the official British Fashion Council tents, then in front of the Natural History Museum in South Kensington.

It was the collection that featured the bodice of see-through moulded plastic that encased worms.

Here’s the back of the show note. 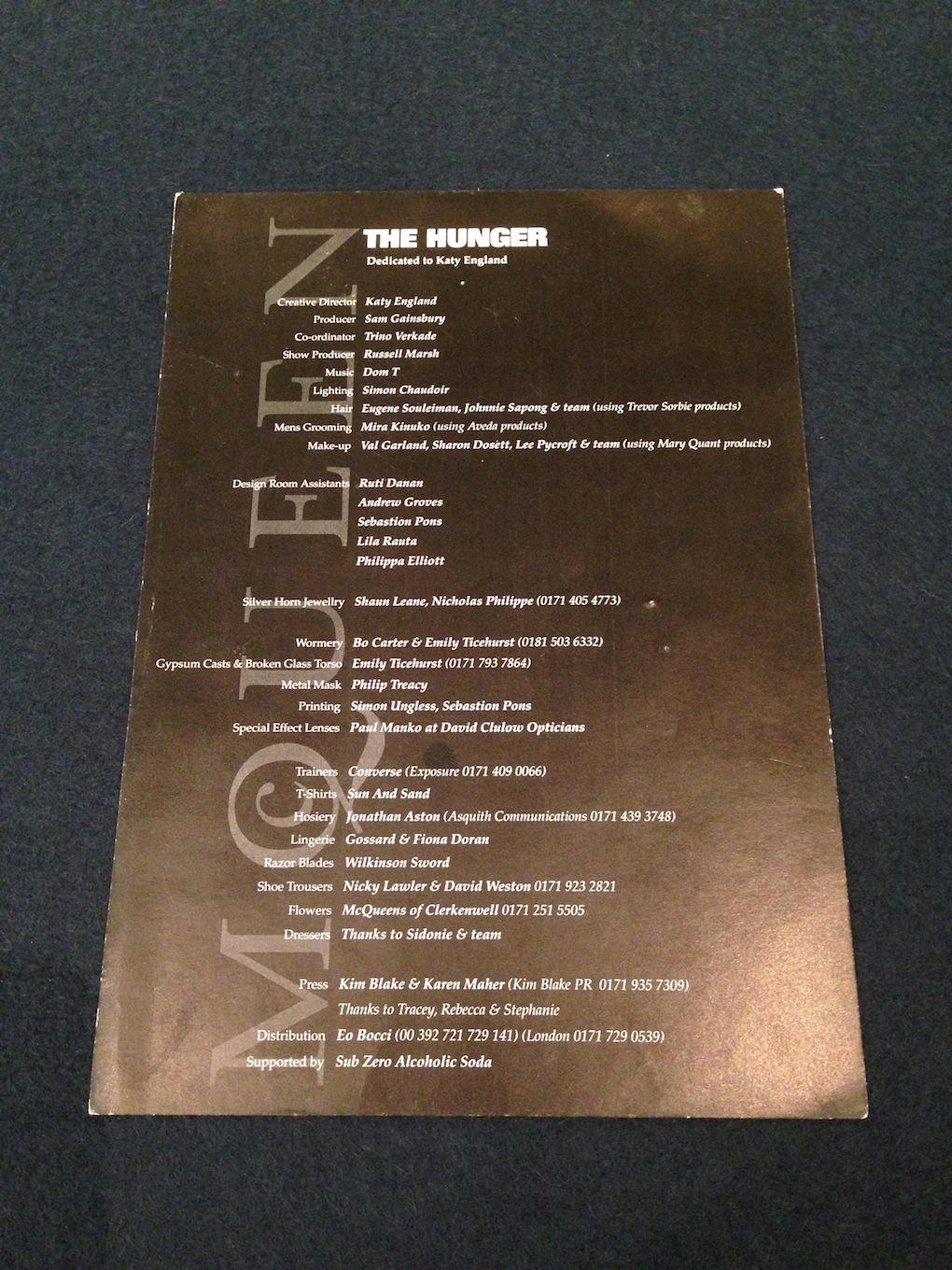 Notice in the list of Design Room Assistants the name Andrew Groves.

The next invite is from Andrew.

From his show Ourselves Alone. 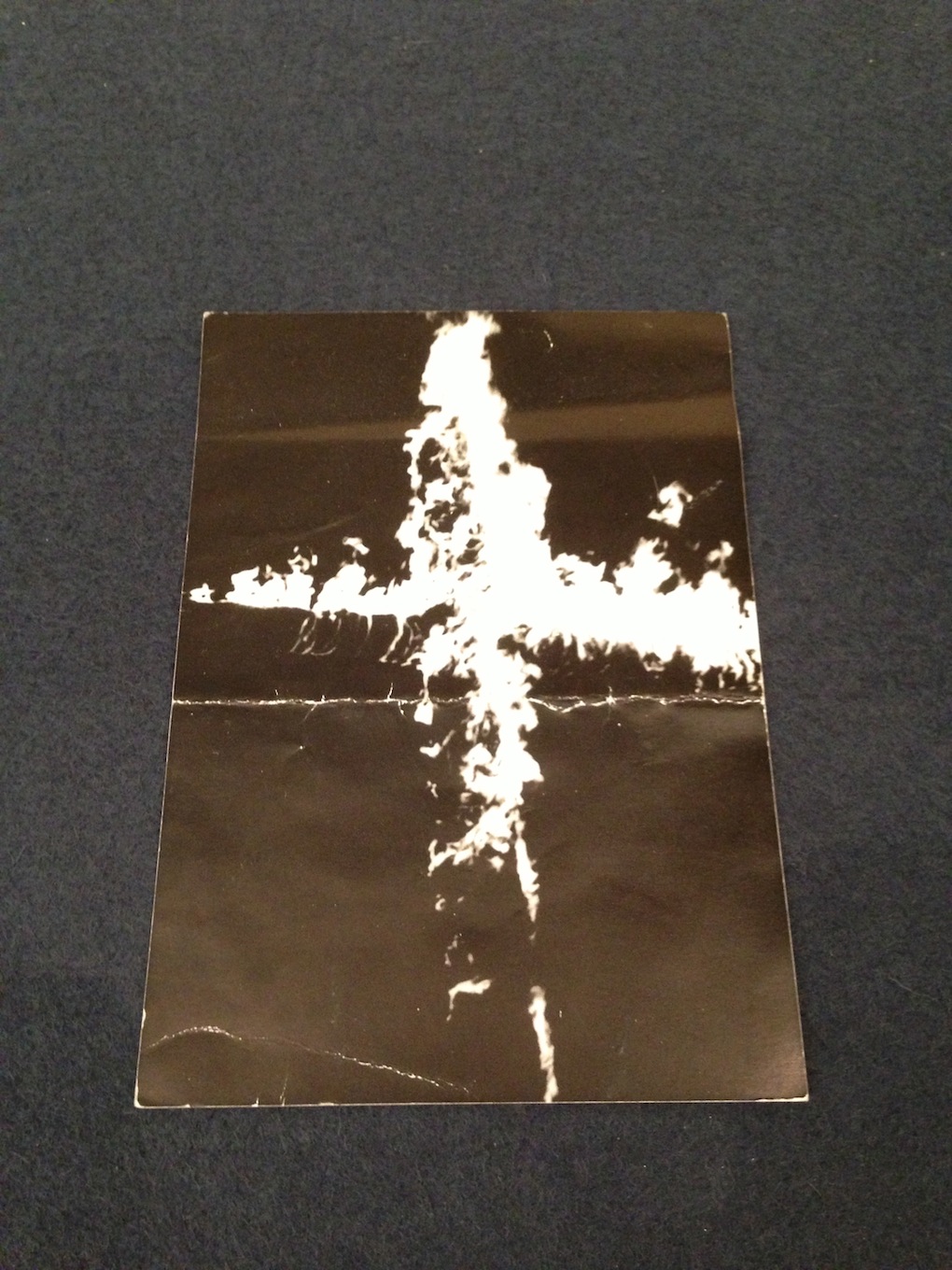 The title of the show was a mistranslation of Sinn Féin, and it came with an information sheet detailing the 16th century origins of The Troubles.

In late 90s London, this was particularly provocative.

Andrew sent me loads of extra stuff with the invite, like the image of a burning cross he ordered from Getty Images.

This was in 1998, before you could just nick an image from the internet.

As I was gathering the pieces together for the vitrine, I realised that there was another side of radical London fashion that wasn’t covered by fashion show invites.

Those who had stalls or stores, and who provoked through imagery on flyers or information sheets.

Like the flyers for Sign Of The Times, first a stall in Kensington Market in the 1980s, then a store in Covent Garden.

Here’s a flyer for the Kensington Market stall. 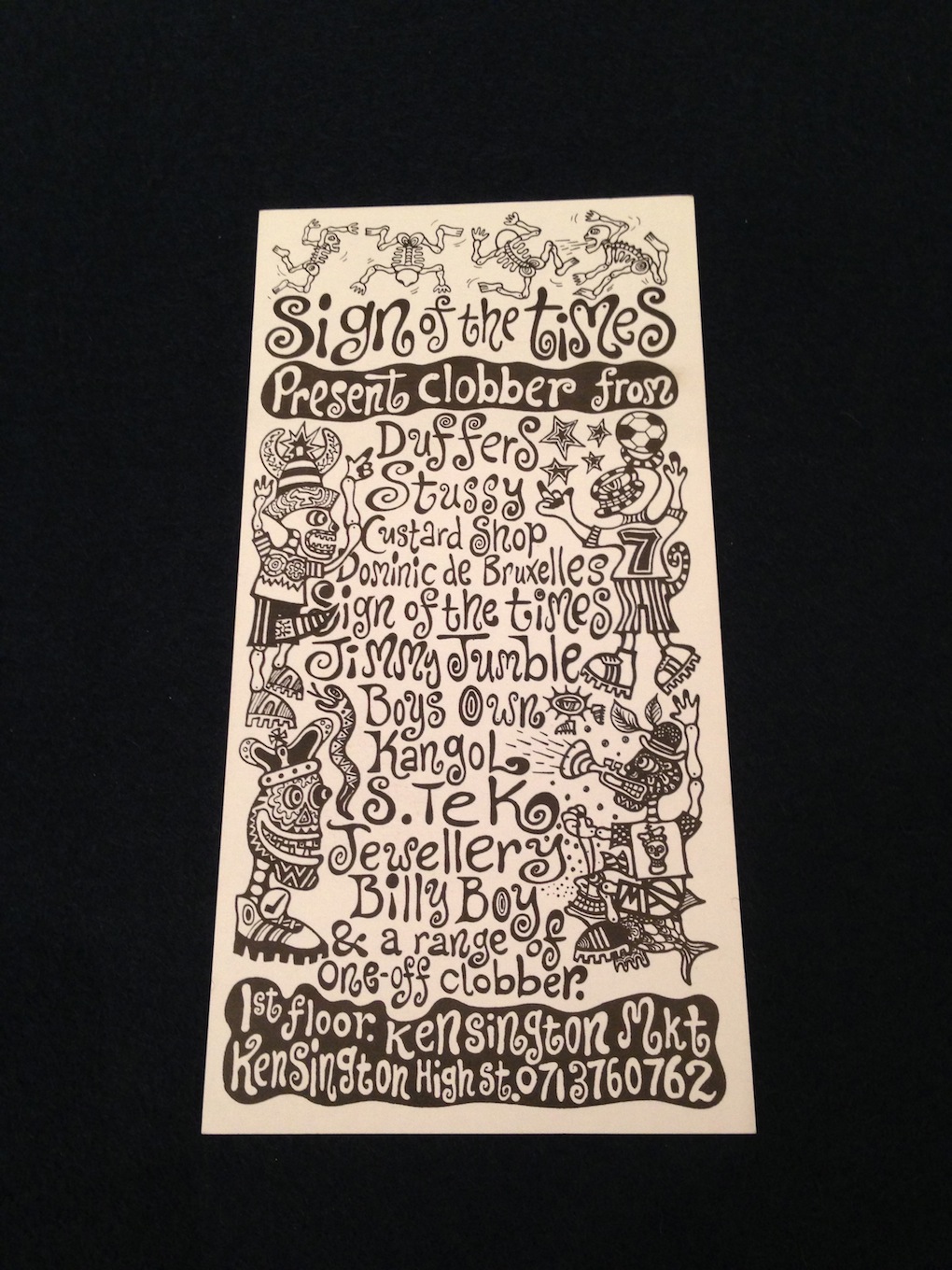 Much of my understanding of fashion comes from visiting Sign Of The Times as a 15 year old kid.

I was obsessed with the place.

I couldn’t afford to buy much, just T-shirts from the bargain bin, like one printed with the old logo for SUPERDRUG.

Obviously I got its connotations.

And a T printed with the Warhol-appropriated logo for BRILLO, which I still wear now.

But mainly I’d go into the store to gawp, and to nick club flyers to stick on my bedroom wall.

I had this flyer for the store on my wall.

Now long gone. This one belongs to Andrew Groves.

See the name Jimmy Jumbles on the flyer?

That’s the name Andrew went by then.

I’ve also included a flyer for a Sign Of The Times Xmas Bash. 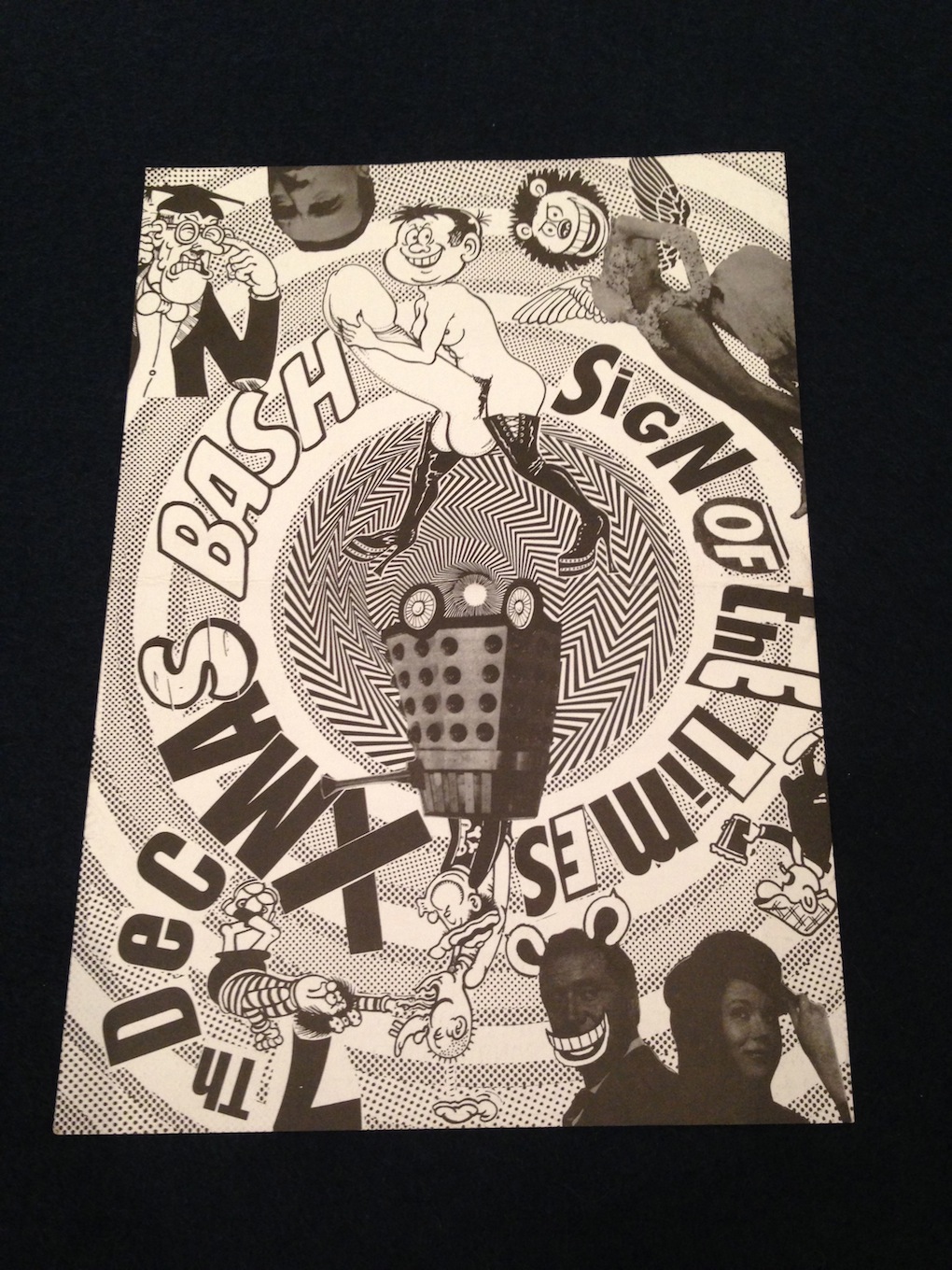 The back of the flyer. 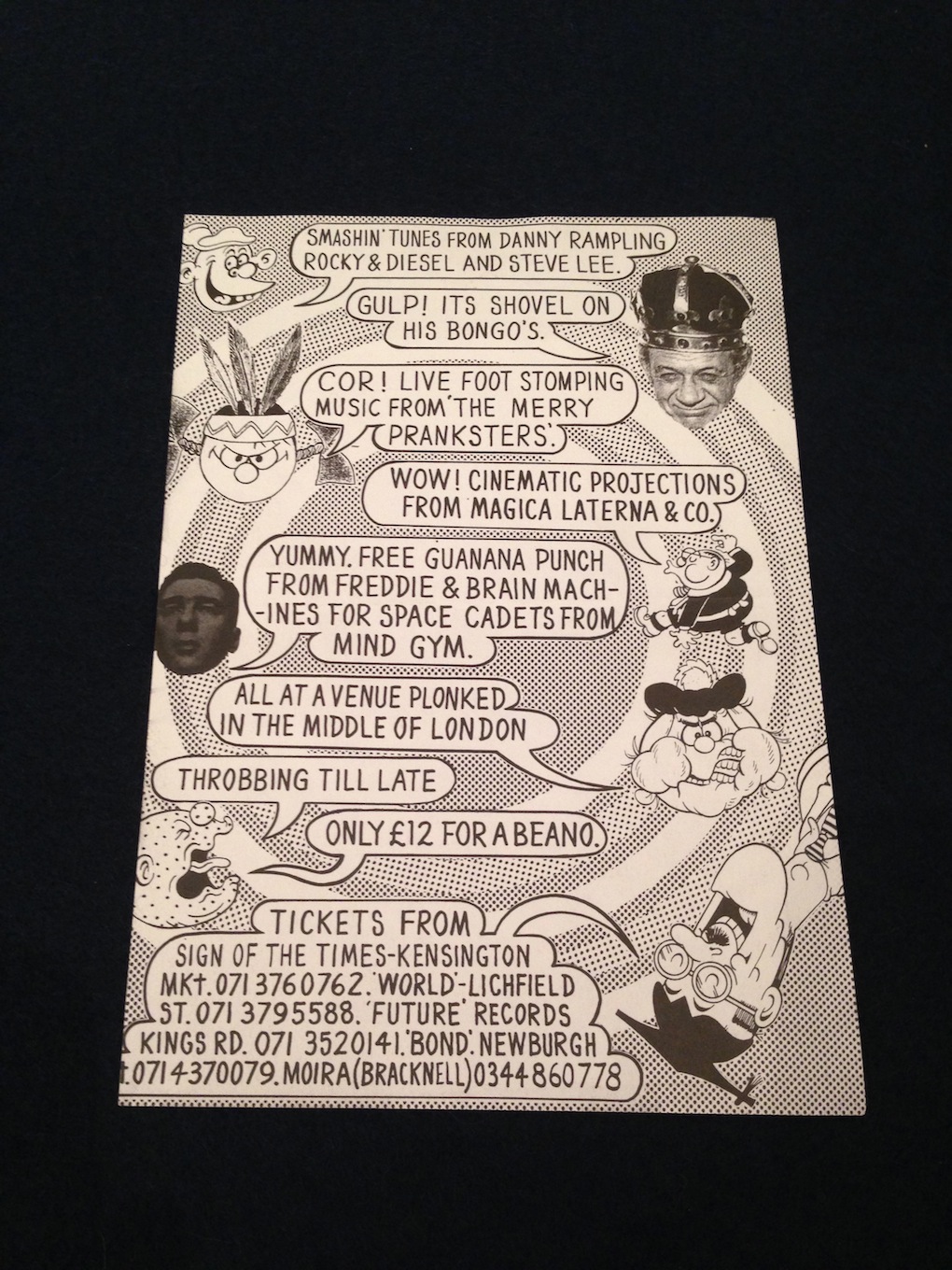 The Xmas Bash soon led to a regular club, which further consolidated the importance of Sign Of The Times to 80/90s subculture.

The other week I met up with Fiona Cartledge, who ran Sign Of The Times, and had a chat with her.

Hopefully next week I’ll get the chance to transcribe it, and will get it up on here.

Another store I used to be obsessed with was Vexed Generation.

Throughout the 90s and early 00s, they predated present day surveillance paranoia.

Their store on Newburgh Street was boarded up, and full of CCTVs.

The clothes were inside what looked like a baby incubator unit – you could only touch them by putting your hands in holes at the side.

I was terrified of the place.

Their collaborator Keith Gray has leant me the information sheet that came with the very first T-shirt they produced. 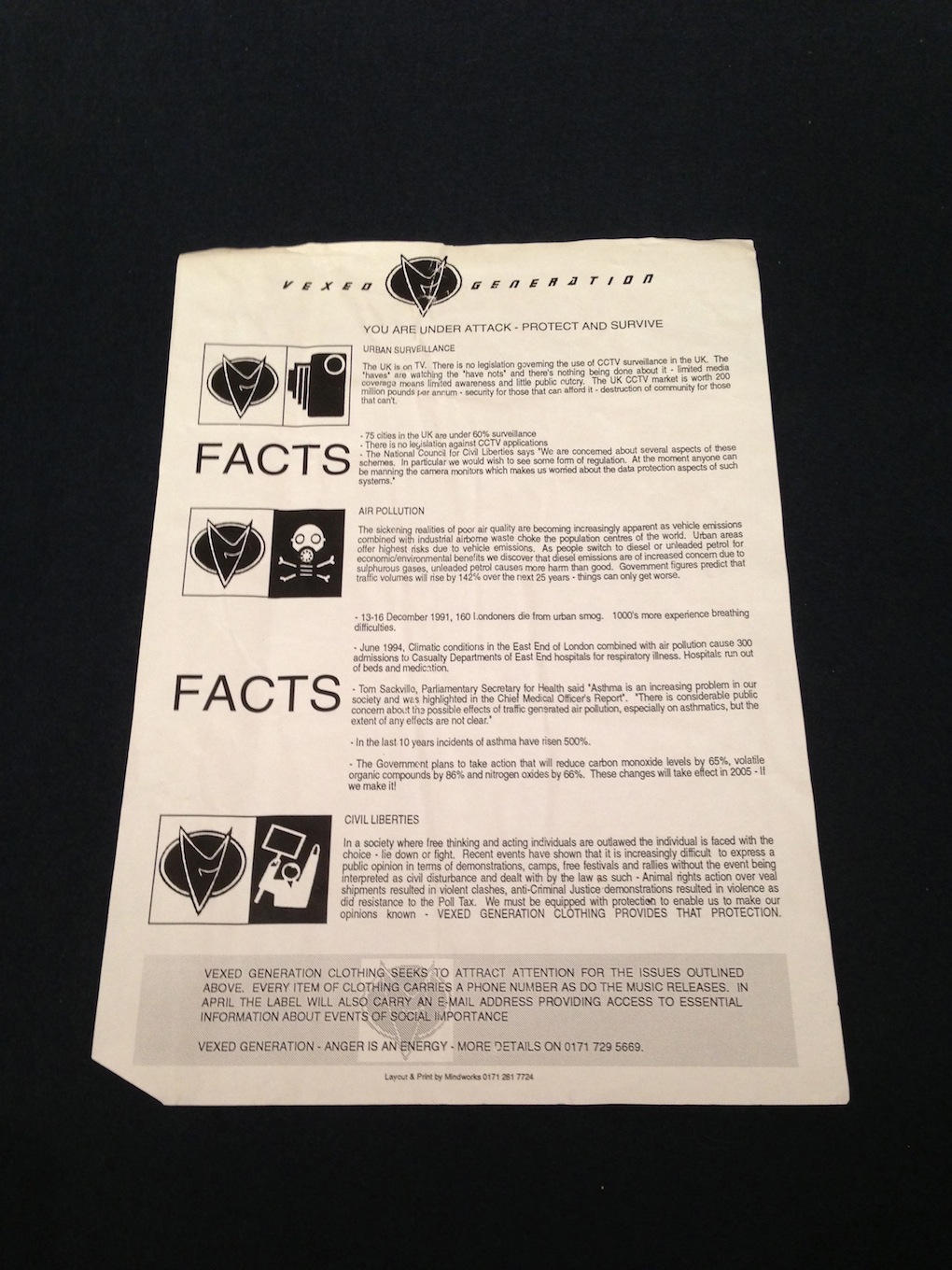 In the same way that a flyer can provoke, Vexed used printed matter and imagery to confront and challenge.

Someone should do a show on Vexed Generation. Soon.

Even though most other forms of invitation are now online, with club flyers now rendered superfluous, the fashion show invite still remains.

Those sent by Meadham Kirchhoff are particularly extraordinary.

I wanted to include the show note which thanked “The Great British Bake Off and Miu Miu shoes for providing me with the only glimpse of happiness I’ve experienced all year”, but the type would have been too small to read in the vitrine.

Instead, I’ve included this one. 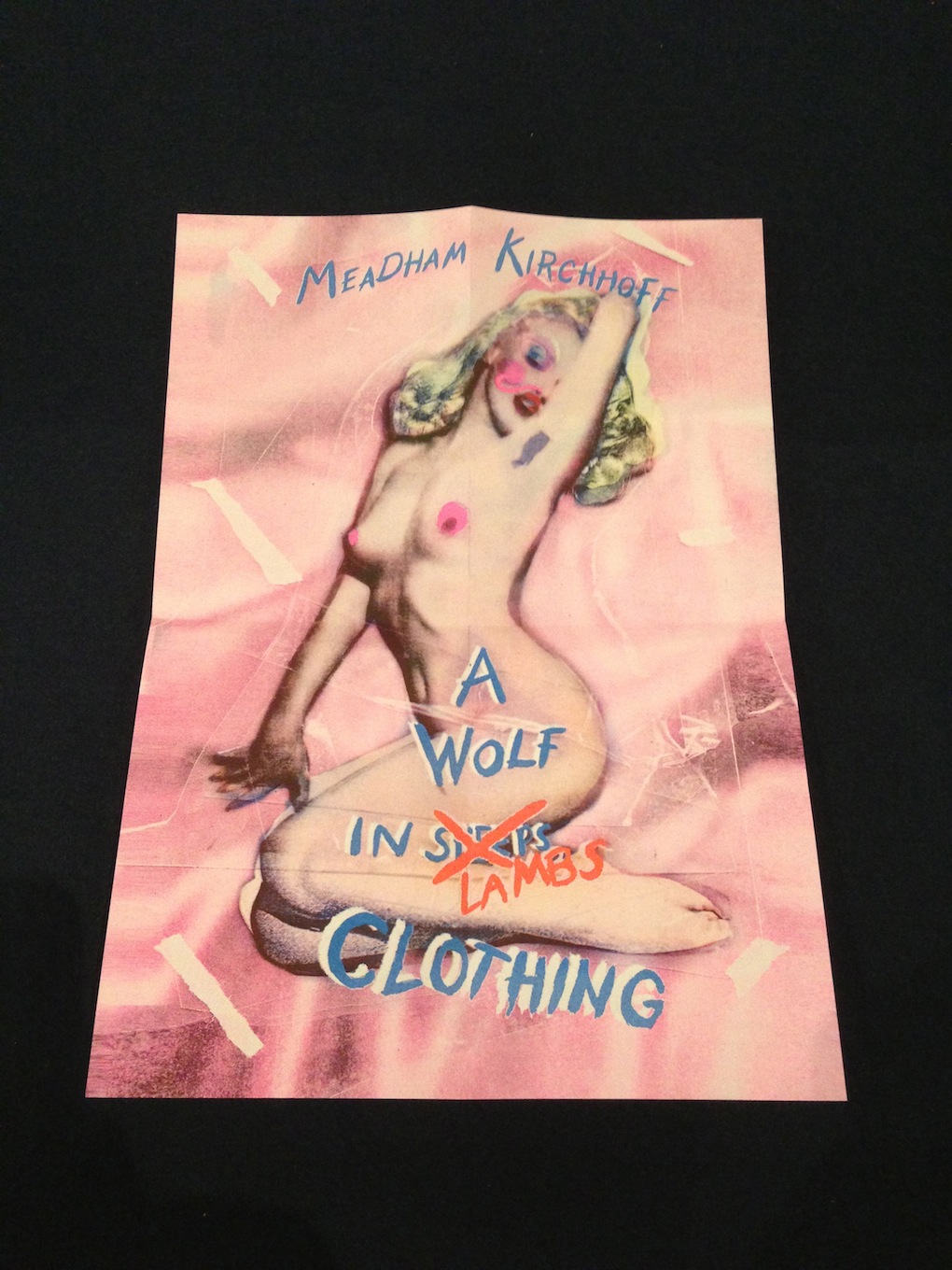 And also this envelope.

They make special envelopes each season, too. 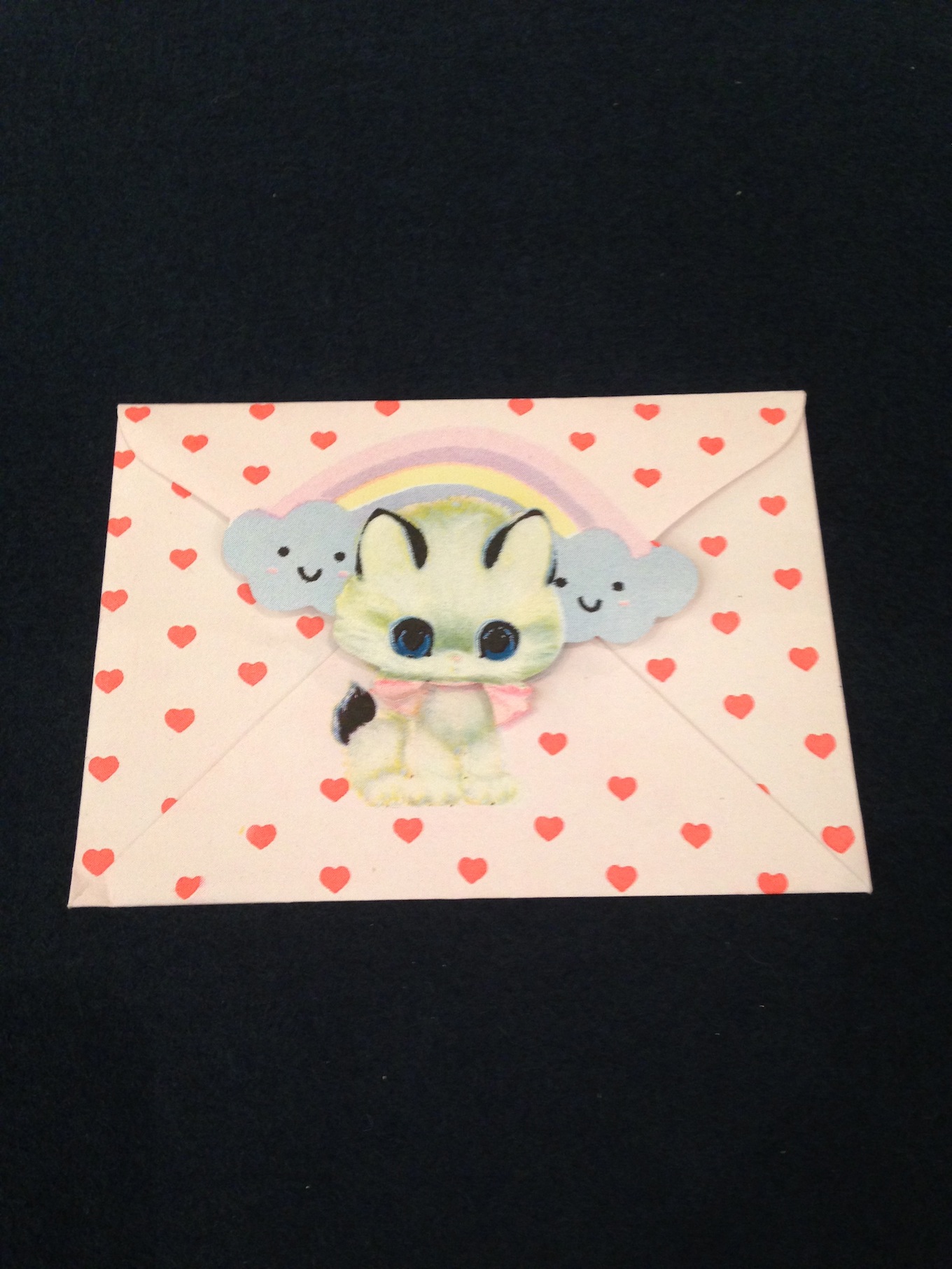 And then I realised I could prop things up in the vitrine.

So I shoved this one in too. 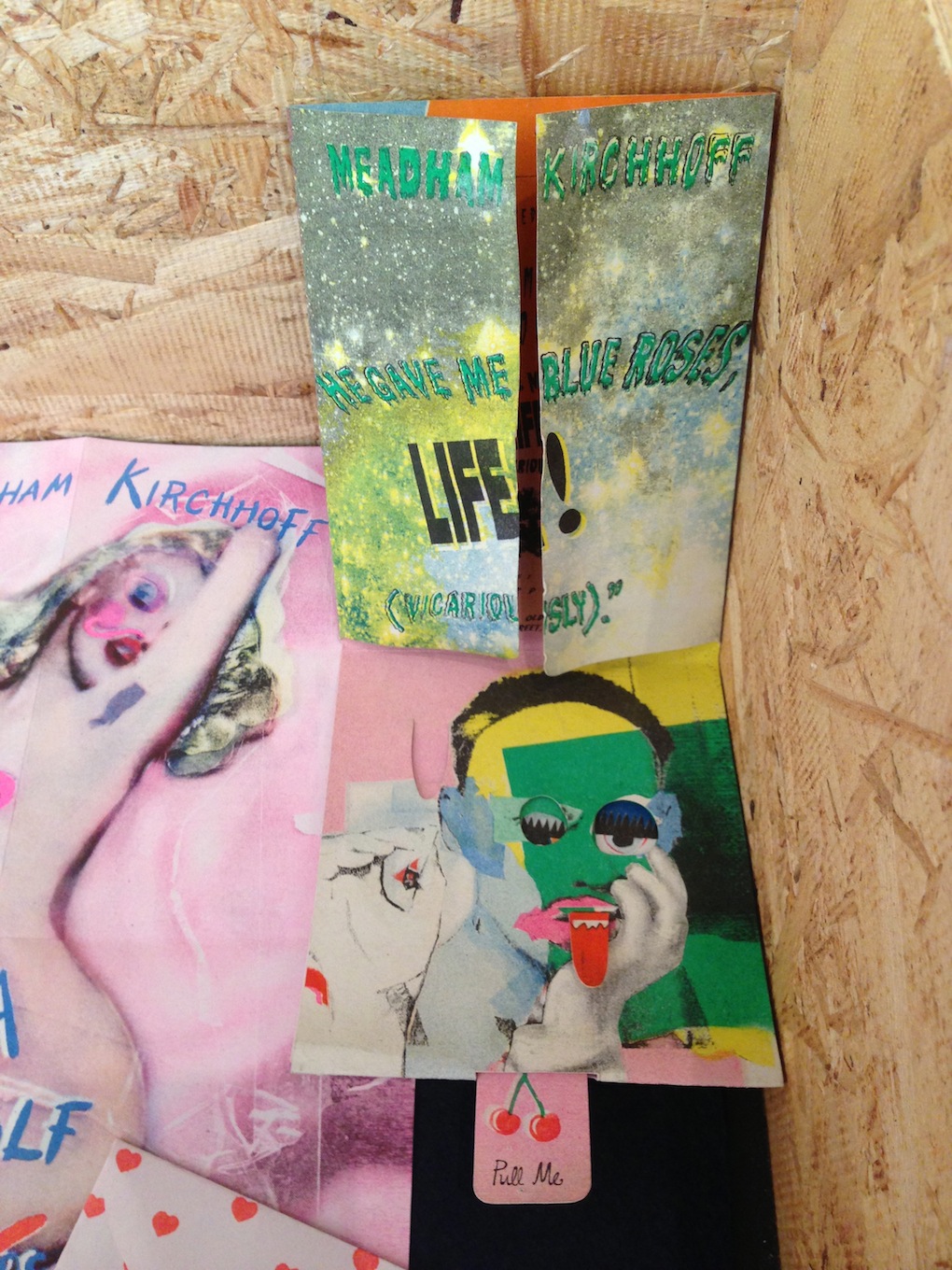 And for good measure, this envelope. 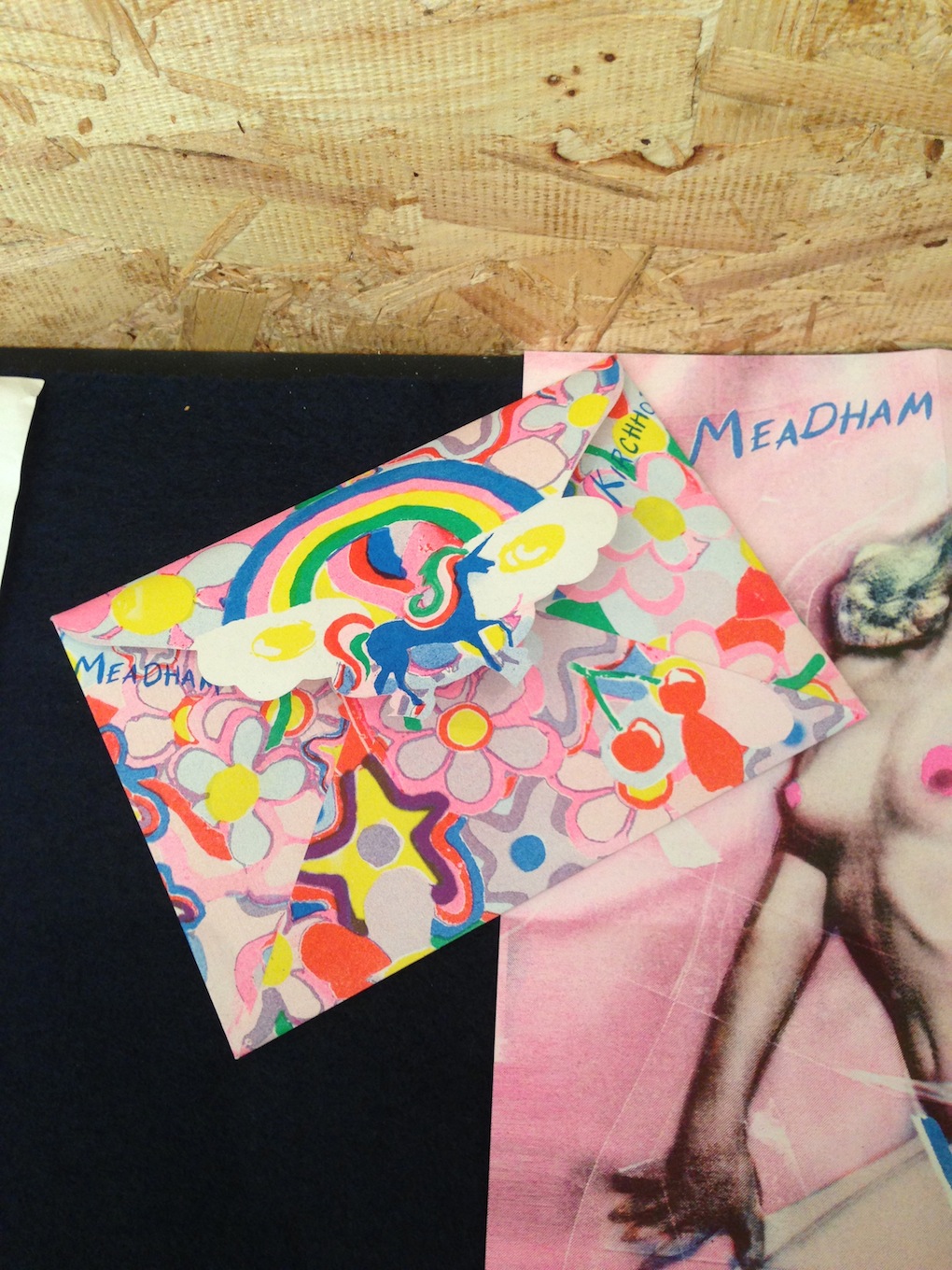 All are courtesy of Meadham Kirchhoff.

To me, these recent invites from Meadham Kirchhoff have the same feel and spirit as the flyers I used to nick from Sign Of The Times for my bedroom wall.

I’ve been thinking much about my bedroom walls, after this invite sent out by Christopher Shannon for his most recent menswear show. 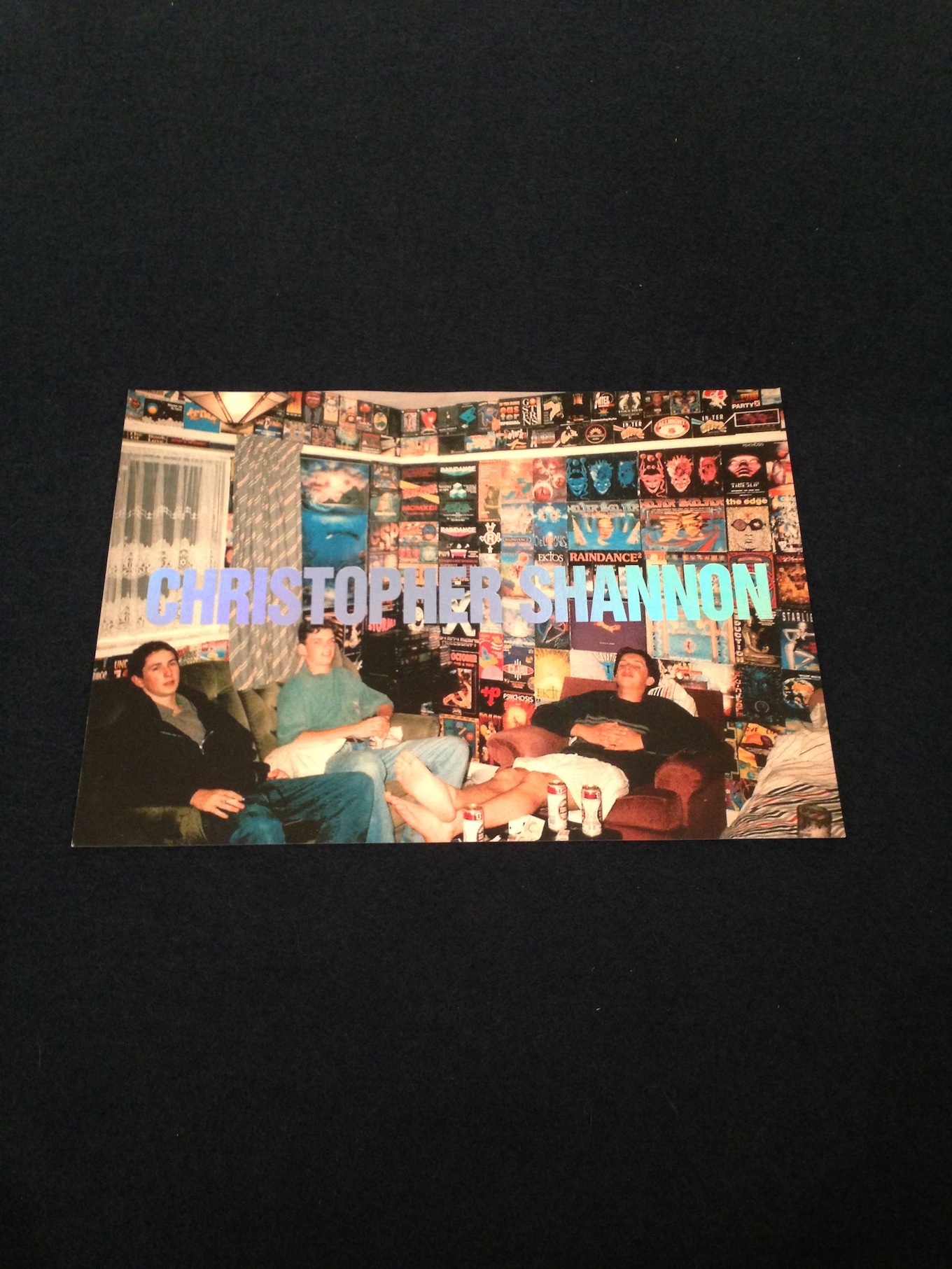 To me, this image is so radical.

In present day London menswear, there’s all those who’ve set their stall in the suit.

With this image, they’re confronted with the reality of young men. Maybe a reality of their own youth.

A reality that shows their present day suit is just a mask, an attempt to convey propriety, and hide the mess beneath.

What makes this image even more powerful is that these boys are in a bedroom.

Maybe they’ve been to all the Raindances and Helter Skelters the flyers for which are stuck to their walls.

Sticking it on their wall.

And then staying in.

My vitrine in full. 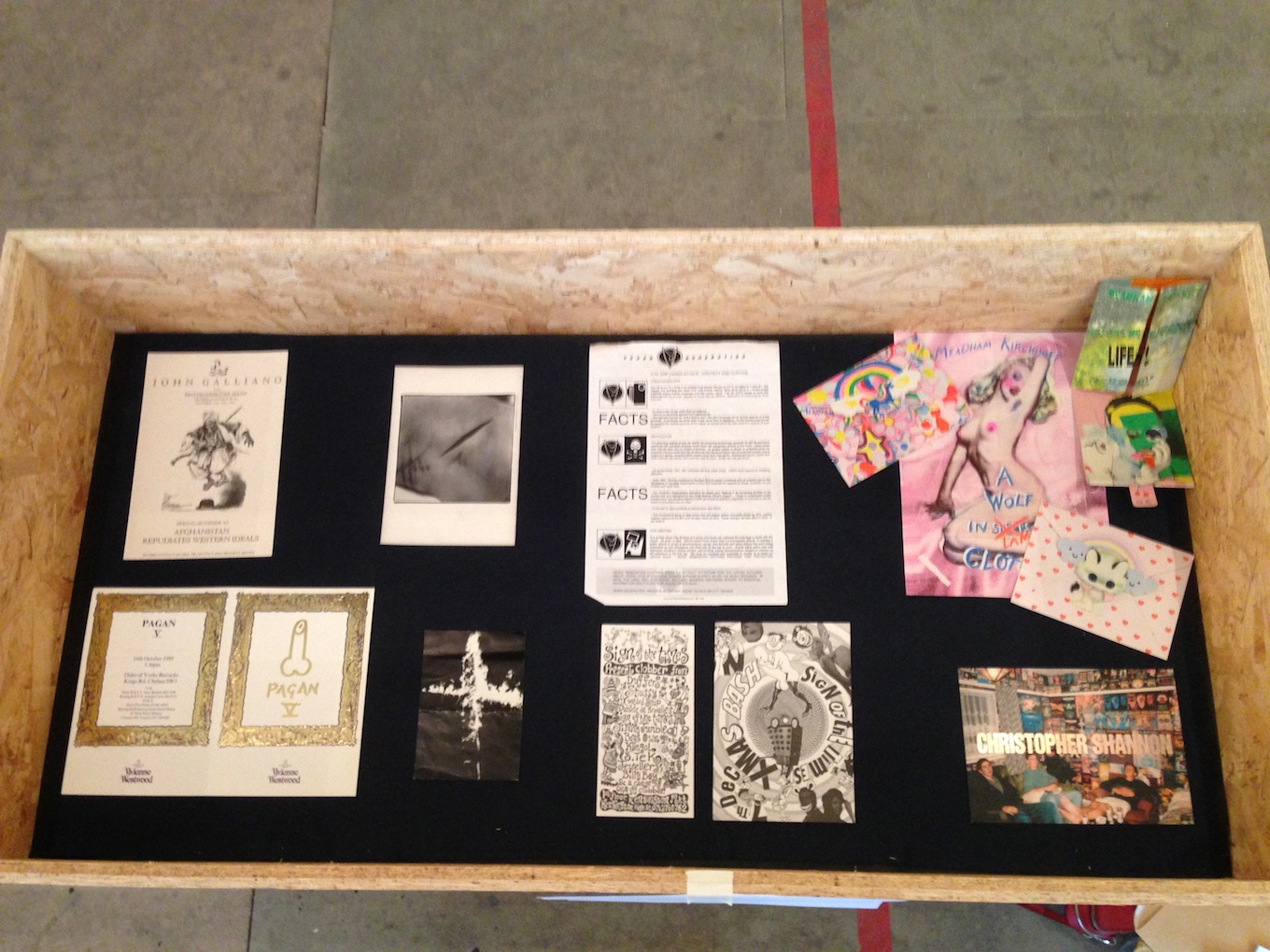 And then, it was sealed. 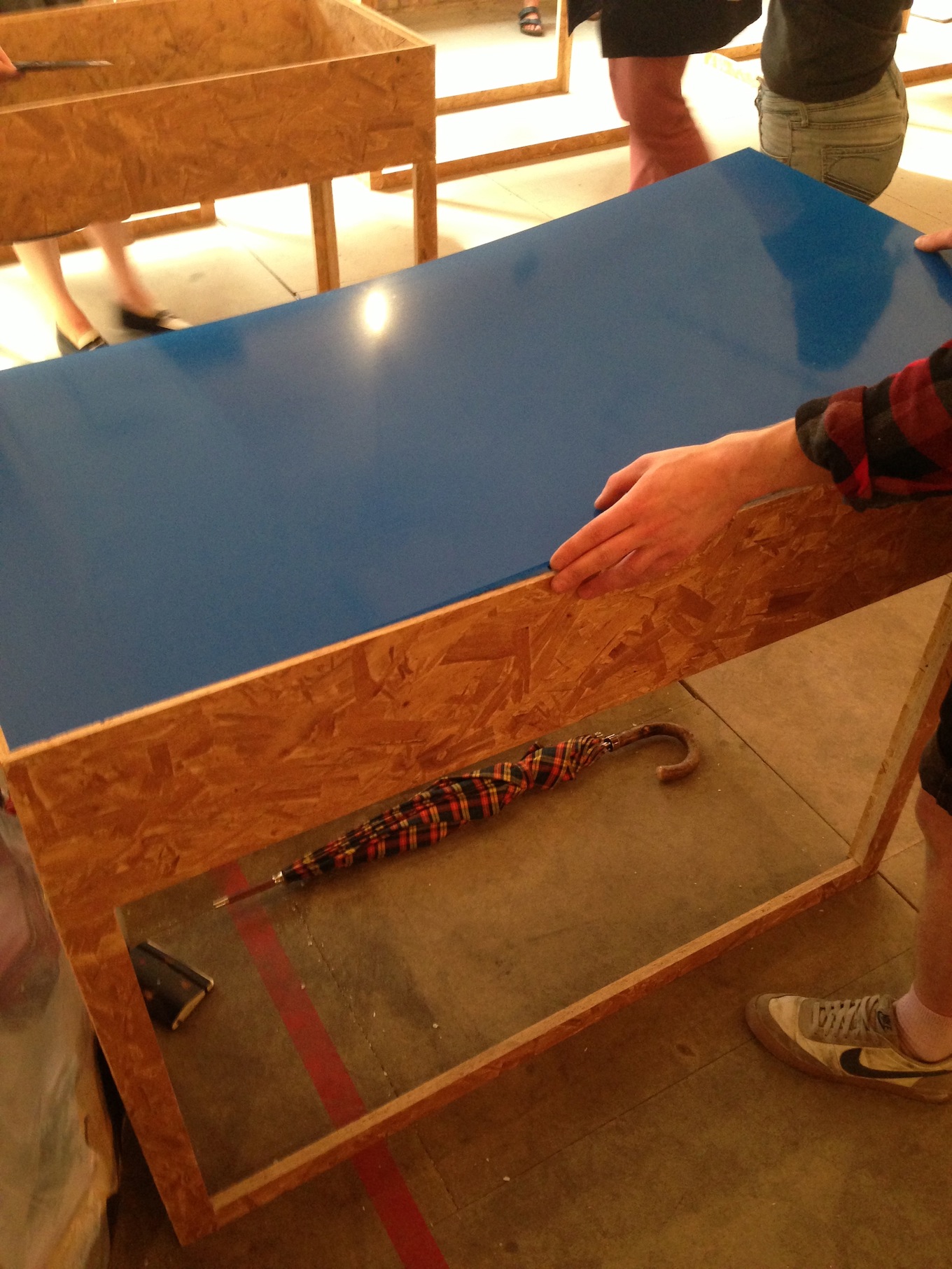 By now, the blue will have been peeled off, and the text stuck on the perspex.

Tomorrow morning is the press view, tomorrow evening the party.

Then it opens to the public on Friday, and stays open till October 20.

I’m co-hosting a talk there on 28th September with Princess Julia, joined by Jeffrey Hinton, Richard Mortimer and Louise Gray.

The talk is titled: Flyers – the Facebook of the Pre-Internet Age.

It’s about how subcultures communicated and connected before the internet.

It’s free, but you need tickets – get them by clicking here etcetcetc

And click here etcetc for more information on the show itself.

And obviously I’ll be posting twelve million more things about it as the show goes on.

But it’s not even opened yet, and it’s already been a ball.